INDIA REPORT 2006
LIVING IN THE BOOK OF ACTS

Our experiences  in India are like living in the book of Acts.  Over the last two weeks I took a team of seven into the remote areas of coastal Andrah Pradesh, and we were not disappointed. However,  the village "Internet cafe" literally took five minutes to bring up one web page, so I could not send you  an update.  So, hold onto your bibles! Here's the report! 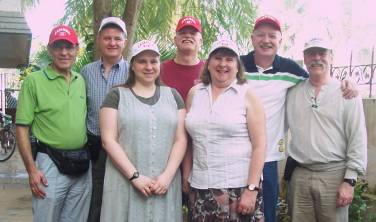 
Rural India is a long way from rural Canada. On Saturday January 28 our team of five men from Campbell River and two women from eastern Canada connected in Vancouver and headed off on our long journey to India.  After twenty hours in the air, a hotel in Singapore, and four more hours on an evening flight, we arrived in Madras in S.E India two days later.The team immediately experienced the first rush of sensory over load - the poor in the streets, the smell of curry, smoke and open sewers, and the never ending sound of traffic. For some it is a real adjustment, for me it was  excitement. I know what is coming. After an overnight  stay in "Hotel Royal Paris" we take the "Pinakani Express" train  to Tenali.

On the train the fun begins as the team sees the real India for the first time -  rice paddies, water buffalo s, thatched roof homes,  temples, and villages - not the common TV images from the huge cities. India IS villages. In fact, 80% of Indians live in  some 800,000 villages, and 600,000 villages  have never heard of Jesus Christ. Most ministries in India never go to the villages, and are missing the greatest harvest field on earth!  This is why we go. To participate in this modern day Book of Acts. Ministry even began on the train as the team left the freezing cold A/C car and chatted with those riding on the benches in other cars. The people are very friendly, and hungry for spiritual blessings. When they hear about Jesus, the miracles happen easily and the people eagerly accept Christ.


Feeding program in the red light district of Tenali 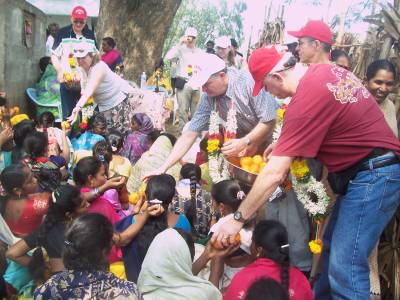 We arrived in Tenali on Tuesday and Wednesday morning began to participate in the work of our partner Harvest India.  This truly Apostolic team is led by brothers Suresh and Suddheer Kumar. It was begun by their mother, Lalitha, 40 years ago in the villages around the Krishna River district. She left her job as a nurse and with her boys in tow, preached the gospel, fed the poor, healed the sick and cast out demons from village to village. Today there are over 1000 churches and pastors, including over 300 "bible women" preachers.  This is unique and powerful!

The work is "Soup, Soap and Salvation" (William Booth)  The poor ALWAYS  have a special place in God's heart. How is it that we  miss what God has said? Pure religion is ministering to the orphan and widow in their affliction. Through Havest India we supply food, medicine, orphanages, clean water wells, old age homes, a nurses college with low caste students, a bible college, water buffalos etc.


THE POWER IS IN THE COMPASSION

I know many of you are reading this to hear about the miracles. But before we get to that,  I MUST impress on you that miracles are linked to compassion!  You who are hungry for  healing and miracles listen to me. It is not the same as the other gifts. The key to healing and miracles is God's love moving in and through you.  This is why more happens in India than at home. When our focus gets off of ministries, churches, names and fame, and our heart is broken in God's love for others, then we will see miracles in abundance here as well.  So let me tell you what we did: 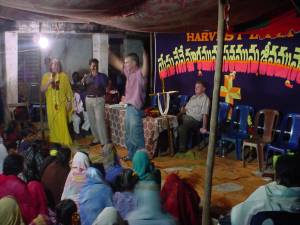 This is compassion - the Soup and Soap. Then comes  salvation and the power of God!  Following the medical camp in Ganapeseram we returned in the evening  and held an outreach meeting. I briefly taught on "Jesus is the God of peace". The glory and peace of God tangibly descended on the place. Then Chris  presented the gospel wonderfully, with Dirk and Scott nailing Roger to the cross to illustrate. 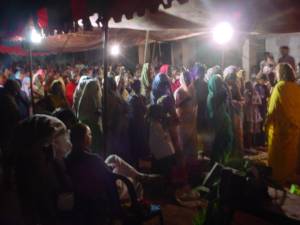 The response was instant. All the people wanted Jesus!   I led  a mass prayer for healing and we went through the crowd laying hands on them. Later that week we heard back from the village about miracles that had happened. Now the local pastor is following up these new Christians - over three hundred!   During the next few days over 1300 came to the Lord in these village outreaches. Soup, soap and salvation. 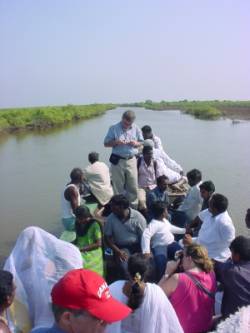 Our final six days were spent on the islands in the Krishna River delta,  an area hard hit by the tsunami. The area is astonishingly beautiful as we putted along in an ancient wooden boat from one place to another. We visited several places and looked at various projects, including  villages hit by the tsunami. The damaged rice fields stand out as the coast is approached. At Nali, we dedicated a new well and over three hundred responded to the gospel. But the people eat only one meal a day because they cannot irrigate the rice paddies properally. We would like to sponsor an irrigation pond there.

MIRACLES IN THE HALL AND IN THE STREET
In the main town of Avanigadda, a hall had been rented for the four day conference. Randy and I took turns preaching. Randy strongly built the pastors faith and I taught on healing ministry with demonstration and participation.  The results were wonderful. Not only were the pastors being healed, but they were also bringing  healing for each other. Most for the first time. 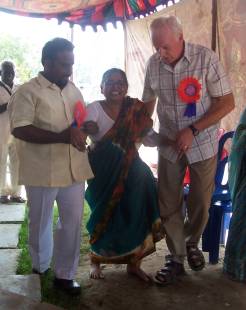 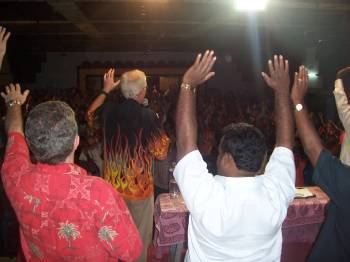 One Hindu woman was walking by the hall and heard me say "put your hand on the place where you are sick" She did and was healed in the street and rushed in to tells us! When she came on the platform she told us she could never have done it before!   Many many miracles took place, tumors disappeared, crippled and painful legs, back and feet conditions healed, eyes and ears opened.  Here is another woman healed and walking as we balance her. Look at her smile!


INTO THE STREETS - 2X2
My team has a particular boldness about them.  Once they found out how friendly the people were, they were always wandering off! At one medical camp we were giving the children immunization tablets, and soon I was asking "where have Dirk, Scott and Roger gone?" It turned out they had gone into the thatched village to meet people and share the gospel. As time went on they became bolder and once they saw the miracles happening in the conference hall they  decided it should happen in the streets as well and off they went. There were many ventures around our area of town, and we even visited the Hindu priest and his family.

Finally a family asked for a visit at the hospital. This young man tried to kill himself by drinking acid.  He had been in the hospital for two months, unable to swallow because of his burned esophagus, and being fed by a tube. Finally a few weeks ago they said their gods were not helping and they began o call on Jesus. Dirk and Scott went to the hospital and prayed for the man. Afterwards he asked for a drink for the first time since the suicide attempt. His throat was being healed by Jesus. 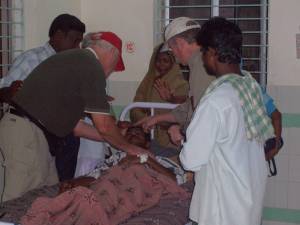 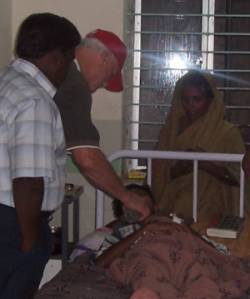 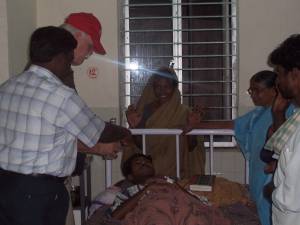 1-  Dirk and Scott pray for the acid victim in the hospital.  Mom is distressed.


WHAT MORE CAN I SAY?
There is only so much telling I can do. We could write a book on this one trip and all the things the Lord has done. It is amazing, and we will return again. My heart's desire is to see the church in Canada become as effective in ministry as Harvest India.  We can have a restoration of desperation and a vision of the harvest.  We can see the needs around us and be moved with compassion. We can have a total baptism of God's love and enter into compassion and miracles.