Fire of God Breaks Through In Korea

Imagine 275 mainline  Korean pastors and leaders, filled with the Holy Spirit, praying in tongues, receiving healing and miracles, finally singing and dancing and going through a "fire tunnel" of impartation!  That was what T.C. board member Steve Falk and I saw happen during fours days of ministry with Impartation Ministries International in Korea.

We joined a great team brought together by  IMI leader Dayoung Kimn to minister impartation to the nations pastors.  Dayoung has been conducting "Impartation Conferences" in Korea for about six years, but this one was an amazing breakthrough.  Attendance was limited to just two hundred and fifty registrants, but calls continued to come in from all over over the nation and dozens more  showed up hoping they could have a place. In what Dayoung said was the favor of the Lord, most of those attending were pastors of the mainstream churches,  many  the largest in the nation!  They truly represented the church of Korea... and they were hungry for more of God!  It was wonderful to see. There was no competition, or adulation of those famous ones among them, but they came as one body to seek the Lord. There was  real desperation as they sought God and  His impartation.  We realized that what was happening in these meetings could impact the whole nation. 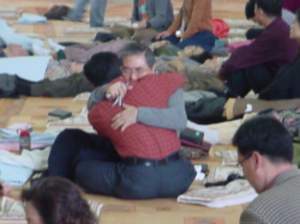 On Wednesday night after Dayong taught, the team  laid  hands on all the the people and the power of God came! Soon many were on the floor, sobbing and weeping filled the air, and some were being healed of deep things in God's operating room! These gentle Koreans were being overwhelmed by God's love!   On Thursday morning Steve Falk shared how God freed him from religion and sent Him into a relationship with the Heavenly Father.. He said " I was a good boy. My family were always pastors and teachers. I had a big library, but it didn't mean anything. I needed the power of the Holy Spirit in my life."  He invited them to be open to all the Holy Spirit had, and did they open up!  That afternoon others on the team introduced the use of flags and the shofar in worship. Dayoung told us many traditional churches had misunderstood or resisted this way of worship and this would be breaking new ground. But they eagerly received it and soon were dancing and using flags in worship!

That evening I taught on "God's love anointing" -  the grace of God's love poured into us and working through us (Rom. 5:5)  Then  I brought eight or nine pastors to the front for physical healing to demonstrate the ease of God's love working miracles. All the Koreans were healed immediately!   Then we  paired the pastors up to minister God's love anointing and healing to each other, and later the ministry team ministered throughout the crowd.  Many more miracles took place, and some of the team reported tumors disappearing under their hands!

Friday was the astonishing highlight of the meetings! In the morning Steve preached an amazing message on the generations climbing 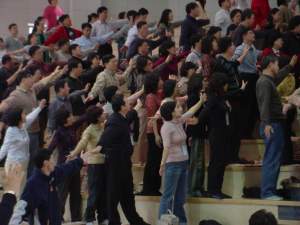 God's mountain together! I've heard many messages on "passing the baton" that never seemed to touch God's heart, but this one was straight from heaven. Basically Steve demonstrated how the generations climb God's mountain together. One generation starts from the bottom and reaches a certain point when a new generation comes on the scene. The question is, can the new generation honor what was done, and climb beyond what the last generation did;  will the last generation let new generation climb past them (new ways and all); or will they start all over from the bottom?  Only when we all work together will the top of the mountain be reached, and  the Kingdom seen. The result of this message was prophetic action! We were in a conference center called "Jesus Mountain" , and the seats are actually built on the mountain side! The three generations made their covenant to climb together standing hand  helping each other up the mountain! (see the picture) There was both repentance and joy!

In the afternoon Dayoung was so amazed at how fast God was doing things that he went for it! He preached on receiving the baptism of the Holy Spirit and the gift of tongues! This was not a subject that would normally be approached so openly in this setting, but the pastors were hungry and all wanted it!  Soon we were laying hands on them and they were speaking in new languages and great rejoicing was in the place! The dance team taught two new Jewish dances and the rejoicing went wild!  God was accelerating things beyond expectations! 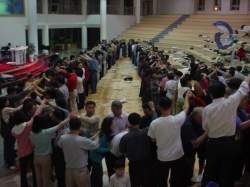 In the evening I taught on being both Kings and Priests (Rev 6:1) , and how we had mainly operated in the church with a priestly anointing : worship, prayer, offerings, instruction etc.  The " kingly anointing" was for outside the walls of the church, and was just as important as what happens inside.  I shared how God gives His Kingly anointing to "conquer the enemy,  take territory, enforce righteousness, and create provision for God's work" I told them that becasue they were pastors, they needed to lay hands on their people and release and bless the Kingly ministry that brings

the Kingdom of God into the world.  Then we lined them up for impartation and anointing with oil.  WOW! Things just broke loose and we moved on into a fire tunnel, everyone having a second and third turn, dancing and singing and praising God. Amazing.

By the end of the conference they were rejoicing and dancing wildly in the goodness of God after seeing miracles and healings in their midst, being mightily filled with the Holy Spirit, and committing the generations to work together! I had to leave early the next morning, but this is one conference I believe has truly touched a nation. God is good!

Steve gets blasted in the fire tunnel.