We just returned from India, what an incredible time! Drew Thomson and I were hosted by Harvest India in Tenali A.P. www.harvest-india.org  This ministry is led by brothers Suresh and Sudeer Kumar.  If you want to connect with an awesome indigenous ministry in India,  this is the one! Check it out. We were treated wonderfully, welcomed with flowers everywhere we went. Hope you enjoy this report, it is quite full!
Pastors Conference 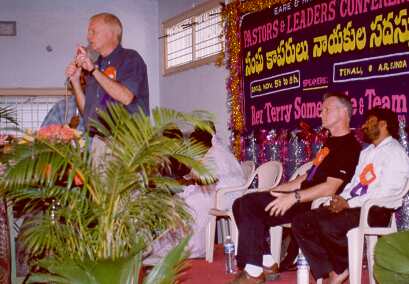 
We taught a four day pastors conference and did four days of village outreach.    The first night of the conference about 350 pastors were present, and we gave our personal testimonies. The next morning we began to call the sick forward for healing,  then after several wonderful miracles in front of the people, we had the pastors pray for each other. We were careful to teach them Jesus was the healer and as his servant they could heal also. A wave of healing testimonies started. Suresh told me again and again how blessed they were that we had come not just teaching,  but demonstrating the power of God. The pastors lives and ministries were being changed. After the conference we heard they were now applying what they were learning in their villages and seeing the results! Praise the Lord! 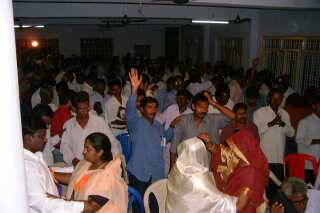 The Deaf Heal The Deaf
I had invited a deaf pastor forward, and asked Sudeer to pick another pastor to pray for him. Unknown to me he picked  another deaf man. He prayed for the first man, then they crossed the  room and called to each other. The people were laughing. I asked what was going on and they said "one deaf man is checking another deaf man's hearing! They both can hear!" That night over 500 came, Hindus were gathered around the building and looking in the windows. The word was out that God was healing. After the meetings, the pastors would tell the Hindus about Jesus!
Crippled Hindu Woman Healed and Saved
As I reviewed the video tapes I listened to dozens of healing testimonies again and this one stood out. A Hindu woman was crippled and could no longer provide for herself. She was in despair and wanted to commit suicide. She heard about the healings from a pastor at the train station, and took the train  to the meetings. She was completely healed, gave her life to Jesus and was praising God vigorously in front of us. Now she wanted prayer as she was heading back to a village full of witchcraft.
A Mighty Deliverance From the Spirit of Kali
Picture: L to R Sudheer Kumar, the girl, Suresh Kumar, myself, Drew

One notable event was this girl being delivered from the spirit of Kali, god of death. She is a pastors daughter, and became possessed  four months ago , they believe as the result of a curse against them.  Apparently this demon comes upon pretty young girls and will not leave until they are dead from either sacrifice or starvation. The people were afraid of  the demon, and little could be done.  They are brought up with these powerful gods and demons all around them, so even the pastors were intimidated.   She was quite possessed and every time I touched her she would scream out "you're burning me" or "I can't look at you" in Teluge language.  Then she would go unconscious. They threw water on her to bring her around. 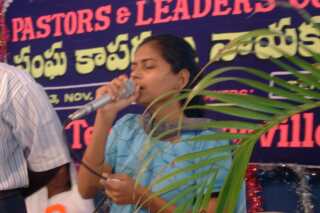 We didn't succeed in delivering her at the meeting but called the pastors to fasting and prayer. Many had already been fasting so that night they continued to pray, taking our boldness and conviction as a cue. They phoned  to tell us that at 2am that they drove the demon out. This is a great victory of Jesus over one of the most feared demons in India! The next day the girl came to the platform and sang a worship song in front of the whole congregation! She was very weak from starvation. I thought of Jesus words after a deliverance - "give her something to eat". 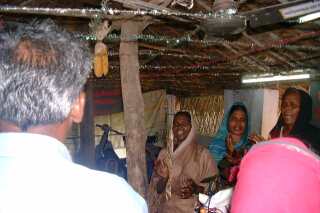 Woman Healed of Leprosy
Many miracles took place at the conference, and reports came in one way or another. One woman was healed of leprosy in the mass prayers. We didn't know about it until we visited her home church (a thatched hut church) and she testified at the Sunday service. I asked questions about her previous condition, she had degenerated hands etc. but was quiet whole when we saw her. Amazing.  Here she is.
After the conference the pastors began to use what they had learned, and reports were being phoned in to Suresh. One pastor returned with boldness to confront a demon possessed woman in his village. Everyone had been afraid of her, but now it was cast out and Jesus is the talk of the whole village.
EXPERIENCING INDIA
Perhaps the most fun, and interesting times was experiencing the culture of India. Here's a few pictures that tell it all. 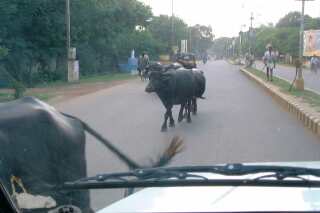 TRAFFIC : cars bikes cows motorcycles chickens people horns rickshaws goats pigs carts kids going every direction at once. Co-operative chaos. License? Who needs a license? You  need a loud horn and lots of nerve.  Actually, it seems to work better than traffic here. The cows like to sleep on this boulevard at night. 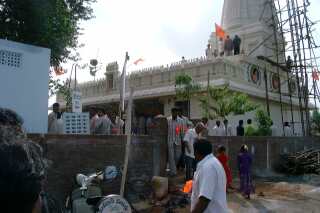 TEMPLES : The Hindu temples and gods are everywhere, including tree gods. This new temple of Si Babba was dedicated behind Suresh's house and contains hundreds of gods. For days the music played loudly from speakers up and down the streets starting at 5:30 am.  I asked Suresh what the words were about and was surprised to find it was a very personal worship to the gods!  "Oh you are our god and we   love you! We devote our life to you because help us."  Sometimes they pattern their music after western Christian worship, including music videos, but there is no joy in it.
We went into the temple court on dedication day along with 25,000 others. They wanted to provide offerings for us to make but we explained we were not "devotees", just tourists. That was OK. Inside the compound the air was filled with dragon flies! (But not outside !) The people were bringing their gold and silver jewelry, candlesticks etc. and putting them in a pile.  Apparently millions of dollars of offerings were made that day. Over 8000 such temples are being built this year in this state alone! But these rich Hindus will not spend one rupee to lighten the load of suffering on their own people. The caste system is a devilish stranglehold destroying  their lives! The Lord spoke to me about how he is jealous for the people and will free them when we come in the name of Jesus! 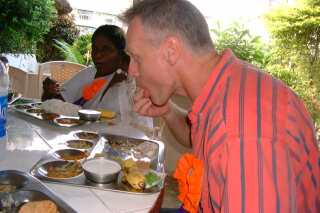 FOOD:
Drew was not wanting to come to India because he never liked the food... until he got here. It was delicious, though after a week my system was not functioning too well. (Curry every meal)  What wonderful hosts! We were fed like kings. We had to use only our right hand to eat. The left hand is used for, ahem, other things.
Scared cows DO make great hamburger!
The pastors at the conference bought four calf's and secretly butchered them in the trees at night for the next days meals.  The reason? We are eating a god!
RE-DIGGING THE WELLS OF HEALING
Healing and miracle ministry is a foundational part of the Foursquare Church. We want it to be the flowing "artesian well" it once was.  In the past few years the Lord urged us to  re-dig the wells of healing and miracles. We have seen wonderful breakthroughs!  As God gives us opportunity we teach believers how to minister healing and miracles with "hands on" demonstrations of  the power of God. In 2002 we merged two Foursquare Churches allowing us, as pastors, the time to travel and minister to congregations and conferences.   The love of God and miracles breaks through the hardest hearts - even in Canada!

"God, connect us with those who will receive and be blessed by our ministry"

This is the prayer my wife Karen and I prayed again and again earlier this year,
and God has opened doors to the nations.

HARVEST INDIA is a great ministry and I urge you to check it out! There are several things I am so blessed about.

1. It was started in India by an Indian Christian. It's not western! Lalitha Kumari began the work 34 years ago walking from village to village preaching the gospel and healing the sick. Hers sons, Suresh and Sudheer are carrying it on. We had the privilege of staying with them for the entire time and got to know them well.

2. Their strategy is to reach the villages where the majority live, the gospel has never been preached, and signs and wonders change idol worshippers to strong Christians. Their Bible college students, and interns are ready to move into each village impacted by the outreaches and conserve the harvest.

3. The compassionate ministries of the medical camps, orphan and elderly homes, bore-well drilling and so on, are meeting genuine needs, but also open the doors through love, into the hearts of the people.

Check them out at www.harvest-india.org

There is no organization representing Harvest India here, so we want to partner Total Change with them in some way. In this way we can fund larger projects and give tax receipts to donors.

Crusades and Conferences  I'm astonished in the way God has multiplied what we have sown and believe God has answered our prayer for good ground..   We have been invited to conduct a larger pastors conference, and a large crusade to reach the villages. The miracles are the key. When we have the finances in hand we will be able to do this.